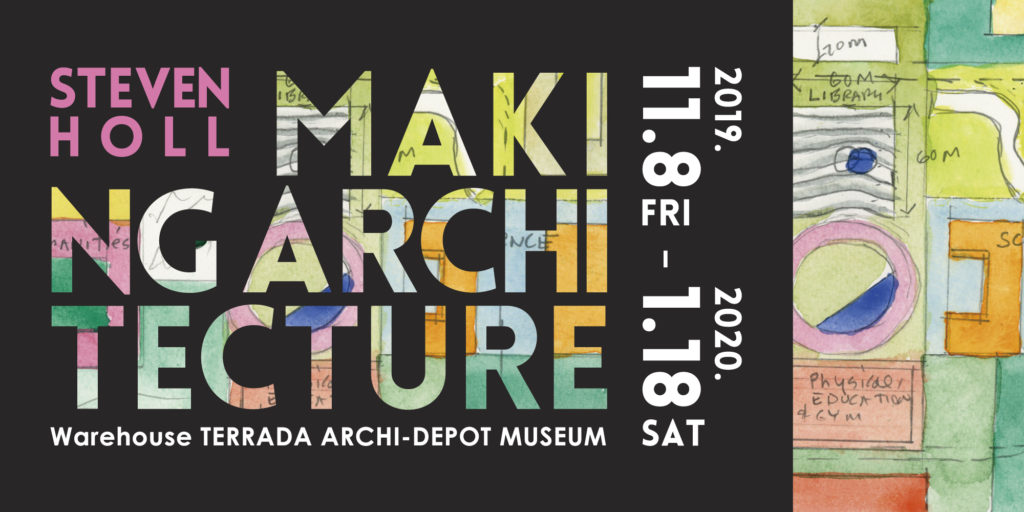 Admission
Admission: Adults 3,100 yen / Students 2,000 yen / 18 and under 1,000 yen
* Ticket: Online ticket system
* Free admission for visitors with a physical disability certificate and one of their carers
* Presentation of your school identification card indicating your age or a physical disability certificate will be required on admission.
* Admission of the tour of Architectural Model Warehouse is included.

Highlights
– World renowned architect, Steven Holl’s exhibition in Japan for the first time in 13 years
– It comprehensively shows the making process that Holl implements to complete his architectural works.
– An opportunity to see the exhibits in Japan, which will be stored in his foundation
– Around 100 pieces highly selected from his 30,000 watercolor paintings which he has drawn in the morning
– Intricate architectural models, each of which were prepared during various design processes.
– Videos including commentaries by Steven Holl himself

About Steven Holl, Architect
Born in Washington, USA in 1947 (Currently 72). Awards: AIA Gold Medal (2012), Praemium Imperiale Award (2014) and others. Prominent works: Kiasma – Museum of Contemporary Art in Helsinki, Finland (1998), Simmons Hall – MIT (Student dormitory) (2002), Linked Hybrid ゙(2009) and more.
In Japan, this is the first exhibition and talk event since the solo exhibition at GALLERY MA (2006), a group exhibition at GA Gallery (2008), and Praemium Imperiale Award (2014). His works in Japan: Nexus World in Fukuoka (1991) and Makuhari Baytown Patios 11-bangai in Chiba (1996). Teaching at Columbia University since 1981. Currently has offices in New York and Beijing, and his own foundation, Steven Myron Holl Foundation in New York.